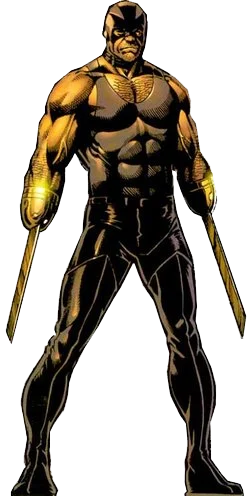 Let's hope he never gets jock itch.
"It's simple: Overspecialize, and you breed in weakness. It's slow death."
— Major Motoko Kusanagi, Ghost in the Shell
Advertisement:

Competitive Balance exists so that there is some symmetry between specific advantages and the Necessary Drawback. If someone can hit hard but is easily hurt, they are a Glass Cannon. If they are unstoppably strong but slow-moving, they are a Mighty Glacier. If they are incredibly fast but go down quickly when hit, they are a Fragile Speedster. A crippling overspecialization occurs when an obscenely powerful advantage makes a trade-off that limits how effective it is.

In some Real-Time Strategy games, unit types are often specialized beyond all reason. They often have only one weapon, effective against just one particular kind of enemy, and usually cannot defend themselves at all if their particular weapon is ineffective. The most prominent examples can be seen in this genre: explosives will deal low damage to infantrynote though maybe the problem isn't so much with their damage as with their accuracy, while Anti-Aircraft cannons can't defend against ground units. This is usually a result of game balance. After all, if tanks are effective enough against other tanks and infantry, then why build anything else? Additionally, units in games are traditionally depicted with only one weapon. A few might have a second gun used for attacking enemy fliers, but that's about it.

See also Anti-Air, Cumbersome Claws, and Strong Flesh, Weak Steel. Compare to An Adventurer Is You, where this is used to force players to work together. See also Sacrificed Basic Skill for Awesome Training for a characterization equivalent and Single-Task Robot for a robot equivalent. Severely Specialized Store is a comedic variation. Diminishing Returns for Balance is when a game forces this by having a combat build that invests everything into one aspect being less effective than a more well-rounded playstyle.

The opposites of this trope are the Red Mage, Jack of All Stats, and Master of All. At the other extreme that loops right back is Master of None, where the character has no great specialization... but sucks at everything anyway.