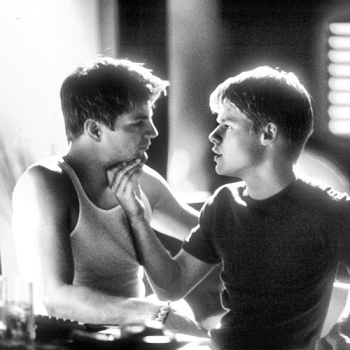 A young gay man, usually in his late teens or early twenties, getting his first taste of gay life. He might still be a closet case or he might have been out and proud since he was 12, but he has only recently started prowling the gay scene as a legal adult, especially if he's in college and away from his parents' watchful eyes for the first time. He starts out naïve, and risks being exploited by the older men around.

Appearance-wise, he's stereotypically rail-thin with a boyish face and minimal facial and body hair. If white (and he usually is, where fiction is concerned), he'll be bleached-blonde with skin that's either pale or artificially tanned. His clothing style will be on the preppy side, and he will wear flip-flops regardless of the weather. note It's important to point out that the twink aesthetic and the twink persona are not the same; a person can be one without the other.

As he adapts to the gay scene, he will begin to realize the power he holds over other men with his youthful looks and might become full of himself. If the story has a darker tone, his life may devolve into a hedonistic spiral of sex and drugs, especially if he was already on the road to addiction before coming out. If the story covers enough time, he'll hopefully be brought down to earth sometime in his 30's, when his maturity kicks in and/or his boyish looks start to fade. At which point, he begins to morph into some other gay trope.

The etymology of the word is a little ambiguous, but it's generally agreed to refer to the snack food Twinkies, because they're gold, delicious, and full of cream, but have absolutely no nutritional value. Similar terms include "cub" for young bears, "baby dyke" for lesbians, and "baby queer" as a more general term. This is essentially the caterpillar to the butterflies of the other gay archetypes. See Uke for the rough Japanese equivalent. Arguably the gay Spear Counterpart to The Ingenue. This trope may overlap with Lover and Beloved, which is about an older gay man with a significantly younger lover.

Not to be confused with Princess Peach's infant star helper, or with "Twinking" (a gaming term referring to lower level characters using hand-me-downs from their higher level characters that are still enough to make them overpowered, or God Moding).