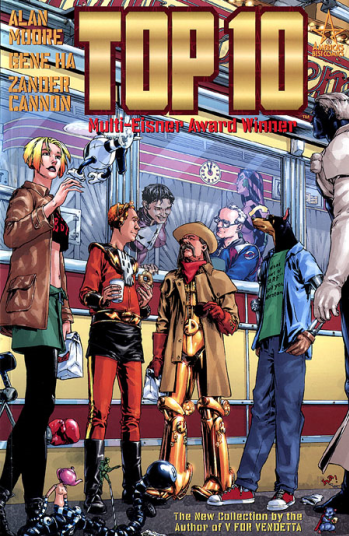 A Police Procedural Comic Book with a twist, written by Alan Moore, drawn by Zander Cannon and Gene Ha, and published by America's Best Comics. Top 10 follows the lives of the officers of precinct 10, Top Ten, as they patrol the streets of Neopolis. The twist is that every single man, woman, and child in Neopolis is a costumed "Science Hero" complete with Code Name. Despite the fantastic setting, the Police Procedural premise is played completely straight. Transportation accidents, a Serial Killer targeting prostitutes, and a pervert groping women are all things they deal with. The twist is that instead of car accidents there are teleportation accidents, the Serial Killer is a grotesque space alien shapeshifting ex-porn star and the prostitutes include Immune Girl whose power is that she can't get AIDS or S.T.O.R.M.S. (a mutagenic form of VD), while the pervert groping women is a shapeshifter who just shifts into the form of a chair.

There was a twelve issue series published in 1999-2000, plus a Spin-Off, Smax, published in 2003, and a prequel, The Forty-Niners, published in 2005, all written by Alan Moore. Also in 2005, another five-issue series set five years later was published - written by Paul Di Filippo and drawn by Jerry Ordway - which pretty much nobody liked, as well as "Season Two", another five-issue series written by Zander Cannon with Gene Ha returning on art in 2008, which most people did. While 2005's Beyond the Furthest Precinct was an Anvilicious Take That! towards the Bush administration, Season Two was much more faithful to the original series and avoided the pitfalls of Beyond... by completely ignoring it.