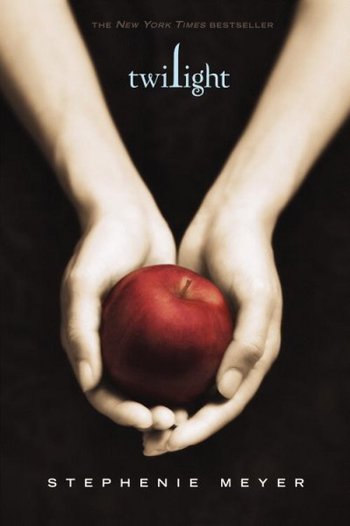 The cover of the first book.
"If I could dream at all, it would be about you. And I'm not ashamed of it."
— Edward to Bella, page 294 of Twilight

A series of young adult Paranormal Romance novels by Stephenie Meyer, and the title of the first book.

High school student Bella Swan moves to Forks, Washington to live with her father. There she meets and almost instantly falls in love with Edward Cullen, a beautiful, mysterious boy in her science class, soon revealed to be a vampire who sparkles.

Bella, meanwhile, turns out to be a very special girl for Edward. For some reason, Edward is:

So Edward wants to form a relationship with Bella while resisting the urge to suck her dry, as well as protecting her from all the antagonists that crop up in each novel.

The series currently consists of four books (Twilight, New Moon, Eclipse, Breaking Dawn). Meyer had plans to make a POVquel called Midnight Sun, which is the plot of Twilight from Edward's point of view. After the manuscript was leaked, the project was put on hold for several years, eventually being completed and published in 2020. Meyer has written a 200 page novella called The Short Second Life of Bree Tanner

, which came out on June 5, 2010. In 2015, for the 10th anniversary of the series, Meyer decided to write a gender-swapped version of the first book featuring Beau Swan and Edythe Cullen titled Life and Death: Twilight Reimagined.

The books were also adapted into a massively successful film series entitled The Twilight Saga, beginning with Twilight and ending with the two-part Breaking Dawn. It helped launch the careers of Kristen Stewart and Robert Pattinson.

Not to be confused with the numerous other works and characters with the name "Twilight".

These books and films contain examples of: