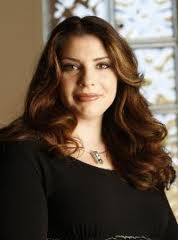 Catering to your sparkly vampire obsession since 2005!
"If you're not writing for teenage girls, you're missing out on a lot of love."
— Meyer in an interview

Stephenie Meyer (born December 24, 1973) is an American author best known for writing the Twilight saga. She also wrote other books including The Host and The Chemist, and additionally contributed the short story "Hell on Earth" to the 2009 young adult horror/romance anthology book Prom Nights from Hell.

Works by Stephenie Meyer with their own pages:

Other works by Stephenie Meyer contain examples of: