"Try not to get caught up in antiquated gender roles."
— Edythe to Beau, page 174 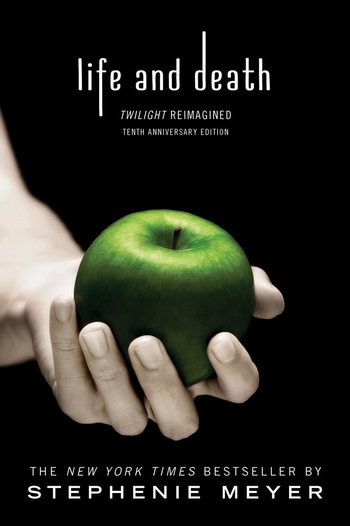 It's Twilight, but everyone except Bella's parents have switched genders. Written by the same author as the Twilight books, but this one is not part of that saga's Canon.

High school student Beaufort Swan moves to Forks, Washington to live with his father. There he meets and almost instantly falls in love with Edythe Cullen, a beautiful, mysterious girl in his science class, soon revealed to be a vampire. Their relationship has a rocky start, but eventually, they win each other over... just when a disastrous visitor arrives in Forks.

This was Stephenie Meyer's response to the many complaints that Twilight's main character Bella was considered too much of a Damsel in Distress, while Meyer thought of her more to be the only normal person in a world of superhumans and wanted to show how the story would still be the same if the vampire was a girl and the human was a boy. It was released on the 10 year anniversary of Twilight in 2015.

This page mostly contains tropes unique to the retelling - many other tropes can be found on the main Twilight page.