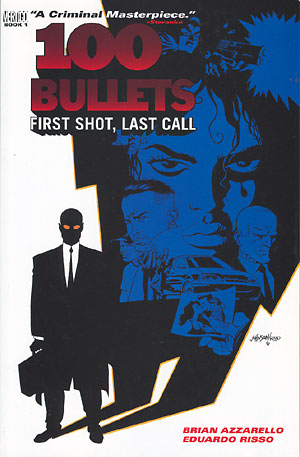 The first trade paperback of 100 Bullets
"I wrote about America. About power and corruption, loyalty and betrayal, and the ties that make them family. Friends and enemies. Fathers and sons, mothers and daughters, brothers. I wrote about moral choices and their costs - whether you make them or not. And about how not making a choice is a choice."
— Brian Azzarello's introduction in the final trade paperback.
Advertisement:

100 Bullets is an American Comic Book series written by Brian Azzarello and illustrated by Eduardo Risso. Since its debut in 1999, it has received much critical praise and gone on to win several awards such as the prestigious Eisner Award for Best Serialized Story. The series ended on April 2009 at (you guessed it) 100 issues, collected together in 13 trade paperbacks.

The general premise of 100 Bullets is simple at first. A storyline would focus on a new Victim of the Week who has been horribly wronged by another individual and, as a result, had their life ruined. At this low point in their life, they're approached by a man in a black business suit holding a suitcase and going by the name of Agent Graves. He offers them a chance at revenge with absolutely no strings attached: inside the suitcase is a picture of the individual responsible for the person's woes, irrefutable evidence that supports this claim, and an untraceable handgun with exactly one hundred untraceable bullets; Graves also guarantees that if the gun and bullets are used, any investigation into a crime attached to the bullets will be stopped, ensuring that the crime will never be prosecuted.

The initial volumes of 100 Bullets revolve around the Shades of Conflict Graves' offer yields for the person he approaches; the main conflict is over whether they should indeed commit a murder they know they can get away with in order to obtain a sense of closure. Graves does not judge anyone he approaches for their decision, but simply makes the offer and lets the person choose as they wish. Sometimes these characters will come back, while others have a very minor impact on the overall story.

Soon enough, the focus of 100 Bullets expands to include Agent Graves himself, as it is revealed that he does benefit from these acts of revenge. Sometimes it's because he wants a particular person killed for his own ends, and sometimes he just wants to see his unique brand of justice carried out. It just so happens that Graves is the leader of an elite group of badasses known as The Minutemen, who acted as the police force for The Trust, a group of thirteen powerful families that control the United States. Graves and The Minutemen left The Trust after being told that they are no longer necessary by order of The Trust's leader, Augustus Medici. The Trust plotted to kill them all, but thanks to Graves' inside man Mr. Shepherd, The Minutemen were spared and given new lives - along with a healthy dose of Fake Memories and Laser-Guided Amnesia.

Now Graves is making preparations to exact his own revenge by gathering his Minutemen once more. At the same time, Augustus is making a few power plays of his own concerning both Graves and the other twelve familes of The Trust...