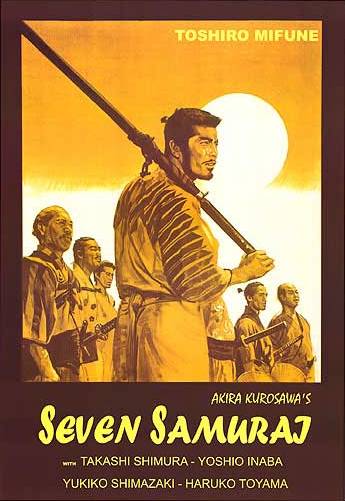 "This is the nature of war. By protecting others, you save yourselves."
— Kambei Shimada
Advertisement:

Seven Samurai is a 1954 Japanese film directed by Akira Kurosawa under Toho; it starred his longtime collaborators Takashi Shimura and Toshiro Mifune in two of the lead roles. It is considered by many Western critics to be the finest Japanese film of all time, and quite a few of them consider it to be one of the finest films ever made

, period. In any case, it's been a highly influential film for decades.

Menaced by an army of bandits and on the brink of starvation, a village in medieval Japan decides to hire a small, motley collection of Rōnin to defend them. Pity they have nothing to hire them with but rice...

It has been remade, homaged, or flat out ripped off numerous times, in genres ranging from western (The Magnificent Seven) to science fiction (Battle Beyond the Stars, Samurai 7, Star Wars: The Clone Wars, Star Wars: The Mandalorian), medieval adventure (The 13th Warrior) and, if you're willing to stretch a bit, anthropomorphized animals (A Bug's Life) and goofy comedies (¡Three Amigos!).

This film has a serious claim to not only being the forebear to nearly every getting-the-team-together-for-a-mission movie — whether it's a Hitchhiker Heroes, Ragtag Bunch of Misfits, Putting the Band Back Together, or even The Caper — but also to being the first modern action movie. While it wasn't the first movie to use such tropes as dramatic slow motion or a reluctant hero—Kurosawa himself had been influenced by the films of John Ford—it was the first to bring them together in such a way that would be instantly recognizable and familiar to the present-day audience.

This film — very frequently appearing in Top Ten of All Time lists — is a Trope Maker or early example for many tropes.