Film / School of the Holy Beast 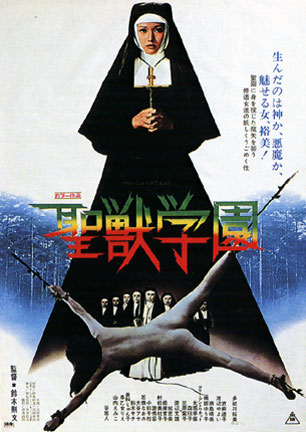 School of the Holy Beast (originally titled, 聖獣学園 Seijū gakuen) is a 1974 film made by Toei Company. It is a Nunsploitation film which is a subgenre of Exploitation Film.

A young woman, Maya Takigawa, becomes a nun at the Sacred Heart Convent to find out what happened to her mother years earlier. She encounters a lesbian mother superior, lecherous archbishops, and uncovers many dark secrets. The convent also practices brutal discipline and encourages masochistic rituals such as self-flagellation. In one scene, two nuns are forced to strip to the waist and whip each other severely with heavy floggers. Later, Takigawa is tortured and whipped by a group of nuns armed with rose-thorns.