Film / Battle Beyond the Stars 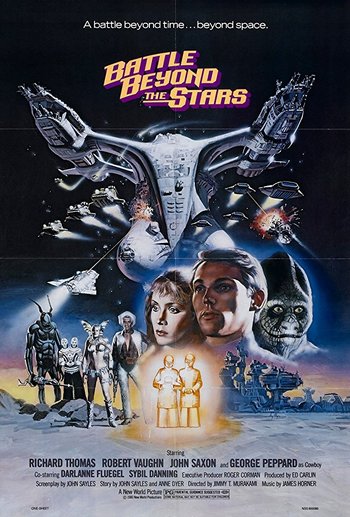 Battle Beyond the Stars is a 1980 American Space Opera film produced by Roger Corman.

Sador of the Malmori (John Saxon) and his crew of mutants roam the galaxy in a huge spaceship armed with a Stellar Convertor, the most powerful weapon in the universe. When Sador claims the peaceful farming planet of Akir as a colony, young Shad (Richard Thomas) volunteers to take Sapient Ship Nell and seek out mercenaries who are willing to fight him. They find Gelt (Robert Vaughn) a Professional Killer who just wants to live on a planet where no-one's trying to kill him, Space Trucker Cowboy (George Peppard) of Earth, Nanelia (Darlanne Fluegel) a Mad Scientist's Beautiful Daughter, Saint-Exmin (Sybil Danning) of the Valkyrie—a warrior woman looking to prove herself in battle), Nestor (Earl Boen) a Hive Mind seeking new experiences, and Caymen (Morgan Woodward) of the Lambda Zone—who'd like to settle accounts with Sador for destroying his species. Counting Shad that makes seven. Sound familiar?

After Star Wars: A New Hope became a surprise hit, studios rushed to cash in on the public's sudden hunger for "Science Fiction" with a flood of bad Space Opera. Exploitation king Roger Corman had no intention of being left behind, but he showed more intelligence than most film executives by ripping off a good plot as well. When SFX companies presented outrageous quotes for their work, Corman took a leaf from George Lucas' book and created his own special effects (under the charge of James Cameron who got his "big break" with this film, along with producer Gale Anne Hurd, composer James Horner and screenwriter — later independent filmmaker — John Sayles). Corman being Corman, he made sure to get his money's worth by recycling the Stock Footage in countless other low-budget sci-fi movies. Horner's score was also used in other Corman productions (a case of Hilarious in Hindsight, given the composer's own recycling tendencies).

Battle Beyond the Stars provides examples of the following tropes: