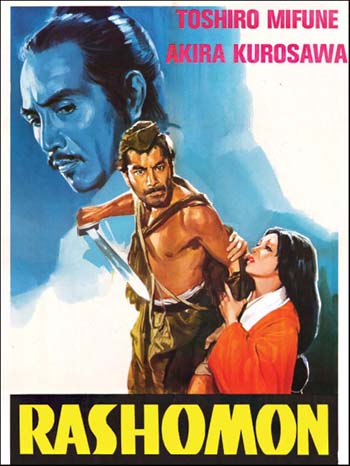 A samurai went out for a walk with his wife, encountered a bandit, and was murdered — and that's all anyone knows for sure about the situation. Each eyewitness to the crime — the Bandit, the Wife, and the Dead Samurai (through a medium) — give vastly different accounts of what happened, and each eyewitness portrays themselves as the most sympathetic figure in their story. What's more baffling is that each witness also claims to be directly responsible for the man's death, albeit with reasonable motives.

Which story, if any, is the closest to the truth? That's the question that a woodcutter and a priest mull over as they explain the situation to a third person (and, by extension, the audience) while they wait out the rain under the gatehouse roof of the ruined Rashomon temple. As the stories are explained, a fourth story emerges from the Woodcutter, who eventually admits that he actually saw what happened — but his story contradicts the participant's accounts just as much as their stories contradicted each other's. By the film's end, neither the characters nor the audience are any closer to uncovering the truth, but the concluding events do provide some reassurance that even though humans lie and steal, they're still capable of goodness.

Rashomon is a 1950 Japanese film produced at Daiei, directed by Akira Kurosawa, and actually based not on Ryūnosuke Akutagawa's Rashōmon (from which it takes only the "waiting out the rain in the ruined gatehouse" part) but on a later short story by the same author, In a Grove. The film itself inspired two play adaptations and the naming of a psychological effect

. This is the film that introduced Kurosawa and Japanese cinema to the West; it received an Honorary Oscar at the 1952 Academy Awards. note There was no offical Academy Award for Best Foreign Language Film category at the time, although this film — and the eight other movies given similar awards between 1947 and 1955 — are often considered retroactive "winners" of the award.It stars Toshiro Mifune as the bandit and Machiko Kyo as the wife.

The Trope Namer of "Rashomon"-Style, a plot that mimics the narrative style of this film.