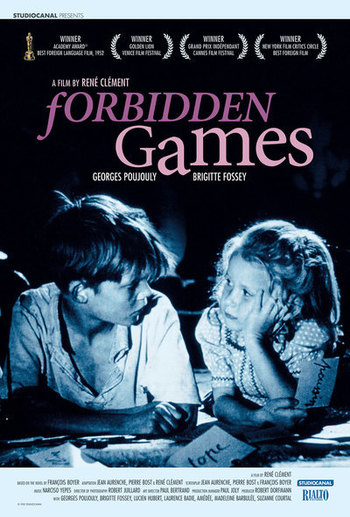 The film is set in the summer of 1940, as Those Wacky Nazis are overrunning France. Paulette (Brigitte Fossey) is a six-year-old girl who is fleeing Paris with her parents. A German bomber strafes the refugee-choked countryside road, killing both of Paulette's parents as well as her pet dog. Paulette, carrying her dead dog, wanders to the farm of the Dollé family. Michel Dollé (Georges Poujouly), the youngest son who is a few years older than Paulette, convinces his family to take her in. Michel and Paulette bury the dog in an abandoned mill, and decorate the grave with a cross. Paulette doesn't want her dog to be lonely, so Michel finds other small animals—bugs, mice, and the like—to go in their improvised animal cemetery. Michel wants to make the little cemetery beautiful for Paulette, so he starts stealing crosses from the church and the local people cemetery. This presents a problem, and eventually gets Michel in a lot of trouble.

Forbidden Games met a mixed reception in France, where some people did not care for the unflattering portrait of the French peasantry, but it was a smash hit overseas. It won an honorary Academy Award for Best Foreign Language Film.