Film / For All Mankind 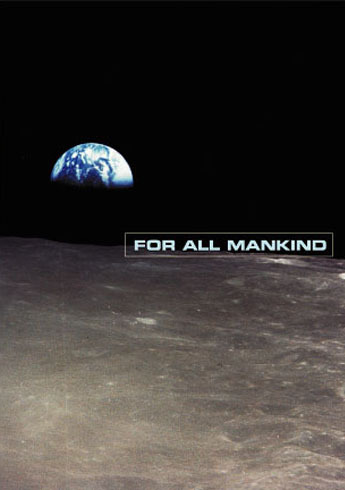 For All Mankind is a 1989 Documentary directed by Al Reinart.

It chronicles the Apollo missions to the moon (specifically, Apollos 8 and 10-17). The film eschews Talking Heads and many other documentary tropes, instead consisting of NASA's own footage of the Apollo missions, overlaid with recorded radio chatter from the missions and commentary from the astronauts themselves. Instead of examining each mission in turn, clips from all of them are edited together to resemble a single mission. Among the highlights is the explosion on the Apollo 13 flight, later dramatized as Apollo 13.

The documentary is also notable for the music, which was composed by Brian Eno. The soundtrack, Apollo: Atmospheres and Soundtracks (1983) was released earlier than the movie, because of a lukewarm audience reaction during test screenings of the film. The film was then delayed a few years and only released in 1989.