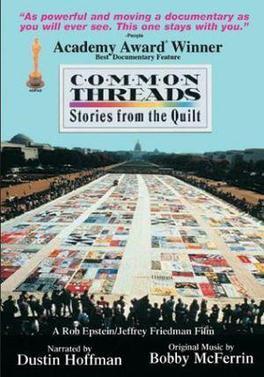 Common Threads: Stories from the Quilt is a 1989 film directed by Rob Epstein and Jeffrey Friedman.

It is a documentary about the AIDS epidemic of the 1980s, using as its hook the AIDS Memorial Quilt

. The film interweaves the stories of five people who died of AIDS and were memorialized on the quilt. The five victims include three gay men (Dr. Tom Waddell, Jeffrey Cevsik, and David C. Campbell), one man who contracted the disease through IV drug use (Robert Perryman), and one hemophiliac boy who contracted the disease through blood transfusions (David Mandell Jr.). Their stories are told through their loved ones, while, in a second narrative track, stock footage and captions trace the steadily rising AIDS death toll of the 1980s.

Bobby McFerrin—yes, the "Don't Worry, Be Happy" guy—performed the soundtrack. Jeffrey Cevsik's story is told through his lover Vito Russo, who died of AIDS in 1990. Russo was a film historian who wrote a book called The Celluloid Closet, which Epstein and Friedman made into their next documentary film.