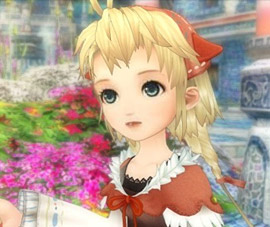 Please help the poor girl out!
"A light snow was falling, and the little girl with the tattered shawl had not sold a violet all day."
— Part 2 of Snoopy's novel, Peanuts
Advertisement:

A sweet, shy, reserved, perhaps ill, girl whose profession is making artificial flowers or growing real ones. Probably an orphan, or at least poor, and liable to die a tear-jerking death.

Not to be confused with literal anthropomorphic flower girls such as Sunny Funny in Parappa The Rapper, or Cheza in Wolf's Rain (she's a hybrid of human and flower DNA). Flower Motifs are not enough to make an example of this trope; at the very least, there need to be corporeal flowers present.

Definitely not to be confused with the "flower girls" of Victorian England who were in fact prostitutes (although many were actual flower sellers, the greater part were only using the flowers as a front). Hopefully.