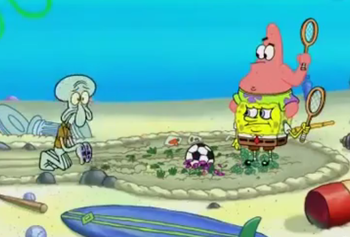 Flowers are beautiful, and gardeners from all around the world take great care of them and spend a lot of time tending to their flowerbeds. Unfortunately, flowers also are fragile and damaging them is easy.

This sad fate happens to fictitious flower parterres quite regularly. They can be accidentally Trampled Underfoot or mowed down by The Klutz, blown away by Hostile Weather, stolen by unscrupulous and mean-spirited characters, etc. Often to the horror of the poor gardener who loved his flowers (which are often begonias) a lot, sometimes to the point of triggering a violent ire within him.

More rarely, the ruination befalls vegetable gardens or lawns instead of flowers.

A Sister Trope to That Poor Plant (plant gets sacrificed to show the danger of something).