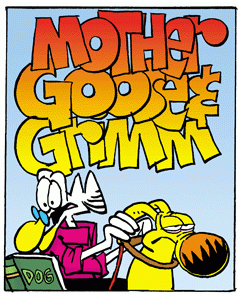 Mother Goose and Grimm is a comic strip begun in 1984 by Mike Peters. The strip centralizes on its title characters: an anthropomorphic goose named Mother Goose, and her dog, Grimm. Except when it chooses to be a one-shot, gag-a-day strip in the vein of The Far Side. Other main characters include Atilla the Cat and Ralph the Boston Terrier.

The comic strip takes place in a world filled with funny animals. At the start of the series, Grimmy and Attila were noticeably less anthropomorphic than they are now, and communicated through thought bubbles as opposed to the speech bubbles they use now.

CBS had an animated series based on the comic back in 1991 as part of its Saturday morning line-up. While it did a great job preserving the style and character personalities, it was criticized for having such weak humor and mediocre direction. The show, like many other Saturday morning shows, only lasted 13 episodes and now only lives on as a faded memory.