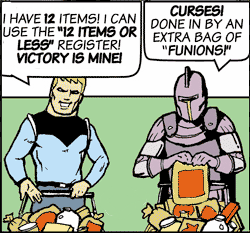 "Twelve items is an estimate. The trapdoor only opens after I scan the sixteenth item."
Joker (dressed as Batman): I must say, Mayor, of all the scum I've taken down so far, it was your wife who disappointed me the most.
Mayor Grange: My wife? Sheila?! What have you done to Sheila?!
(Camera pans to Sheila, who's been Joker gassed and left dangling outside a skyscraper)
Joker: Eleven items at a ten-item grocery checkout. She had it coming.
— The Batman
Advertisement:

In large supermarkets, certain checkout lanes will be designated "N Items or Less". These "Express Lanes" allow customers with small orders to avoid a long wait in line behind those who are purchasing many items.

In fiction, Hilarity Ensues when someone blatantly exceeds the limit, or tries to stay under by making up rules about what can be considered as a single item. Often times, exceeding the limit by one item is common fodder for a Felony Misdemeanor.

There's a variant where someone is only a little over the limit in a way that everyone finds acceptable, but wastes a lot of time fretting over the limit out of principle, trying to decide what they don't need and what should or shouldn't count as one item.

This was Truth in Television for a long time as stores are reluctant to enforce this rule due to customer service reasons. However, the replacement of express lanes by self checkout machines have turned this into a Discredited Trope. Some proprietors have chosen to designate lanes as "basket only", placing a limit on the volume of purchases rather than quantity.