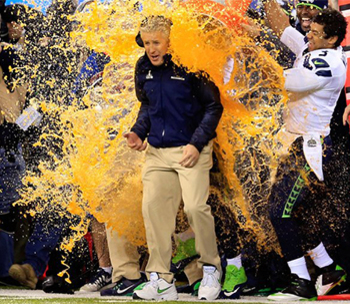 The only acceptable response to winning the Super Bowl.
"If you’ve never had a Gatorade bath, you haven’t done anything very exceptional."
— Mike Ditka
Advertisement:

When a character or a team are celebrating the victory of winning the Big Game of the season, whether it's baseball, football, soccer or any other game, there are tons of ways to celebrate your victory. Some go for picking up the coach or hero of the hour in a celebratory matter. But then, if you've just won a long, hard-fought physical contest you're going to be hot, tired, and sweaty along with jubilant and impulsive - why not use the rest of the hydration fluid in that cooler to show just how they're so hot they need to cool off, in a manner of speaking? So just dump that cooler of liquid over the coach's head, often water or Gatorade, as well over the winners themselves.

Sub-Trope of Sports Story Tropes, Bizarre Beverage Use, and Victory and Defeat. Contrast Bucket Booby-Trap, which is mostly with prank objectives rather than just celebrating.