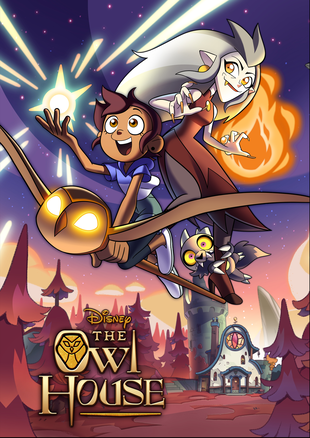 From left to right: Owlbert, Luz, Eda, and King. Oh, and Hooty is on the doorway in the background.
"Welcome to the Owl House, where I hide away from the pressures of modern life... also the cops... also ex-boyfriends."
— Eda Clawthorne

The Owl House is an animated fantasy/horror comedy series produced by Disney Television Animation and created by Dana Terrace (Gravity Falls, DuckTales (2017)). The show premiered on January 10, 2020, serving as the first Disney Channel series of the 2020s.

Luz Noceda (Sarah Nicole Robles) is an enthusiastic teenage girl, who struggles to fit in with her peers due to her overwhelming love for the macabre. One day, whilst en route to summer camp, she stumbles upon a portal to an archipelago in the Demon Realm, a mystical dimension from where all of Earth's myths originate. Upon her arrival, she finds herself crossing paths with Eda Clawthorne (Wendie Malick), a rebellious yet highly skilled witch, and her adorably tiny yet feisty monster roommate King (Alex Hirsch), who make their home in the titular abode.

Though she initially wishes to return to Earth, Luz quickly takes to her magical new environment and makes herself Eda's apprentice, despite lacking any innate magic abilities of her own. Thus begins her journey as a witch-in-training; discovering the secrets of her new home, making new friends, trying new things, and figuring out where she truly belongs.

The show was renewed

for a second season ahead of the series premiere, which will begin airing in mid-2021.

I'll Think on That

Throw Things at Me

I'll Think on That

Throw Things at Me