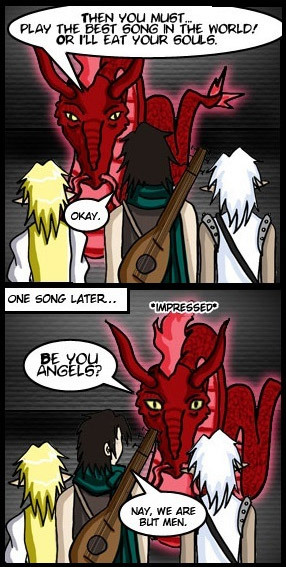 ROCK!
"You have my respect, Stark. When I'm done, half of humanity will still be alive; I hope they will remember you."
— Thanos, Avengers: Infinity War
Advertisement:

This trope occurs whenever a character is somehow able to impress, wow, or in any case greatly surprise another one who is far bigger, greater, and/or more powerful. They may not necessarily be a Physical God or Eldritch Abomination, but the gap between them in terms of size or power etc. is so great that the comparison is like a man to a god. And yet somehow, despite being so much less talented than this powerful entity, this character was able to present the greater being with a skill or item that captures the godly being's imagination, maybe even giving them more perspective on an issue. The godly being might very well be perfectly capable of what the lesser being did and/or the skill/item in question isn't that great by the lesser being's standards. And yet, the godly being is impressed by their achievements or character.

How this happens can vary. Perhaps The Hero has done something incredible to prove to the story's Big Good that they are The Chosen One. Or a bunch of lesser characters were able to impress a Cosmic Entity by showing them The Power of Friendship, The Power of Trust, or The Power of Love. This is almost bound to happen if the lesser character was able to vanquish another powerful being. Bonus points if the impressed deity wasn't able to do it.

Alternatively, this pure deity may have felt that Humans Are Flawed or are simply beneath them, and this character was able to prove to the deity that Humans Are Good or Humans Are Special. A lesser character could have also called out some Jerkass Gods and those gods end up becoming impressed at how a puny being had the guts to make them rethink their behavior.

This can extend to villainous entities as well. Perhaps the character was able to gain the villain's respect or shock them by standing up to them and showing they are not afraid. Heck, the lesser character doesn't even have to oppose the Evil Overlord in question. Maybe this puny person was some Harmless Villain, Mook, or Ineffectual Sympathetic Villain that the Evil Overlord didn't think much of before, but then the mediocre villain proves to the Big Bad that they aren't a joke after all and the evil entity could be so impressed, they give the small time baddie a Mook Promotion or even makes them their right hand man.

Be careful not to confuse this with Intrigued by Humanity. In that trope, the entity (which may not even be powerful) is simply interested in humanity as a whole. A Wowing Cthulhu moment may cause this and vice versa, but it's not a defined event.

Compare with Did We Just Have Tea with Cthulhu? where the greater being may not necessarily be impressed, but nevertheless decides to have a fun time with the lesser character.

After King Neptune tries Spongebob's Karbby Patty, he deems him worthy of being an Atlantis-level chef.

After King Neptune tries Spongebob's Karbby Patty, he deems him worthy of being an Atlantis-level chef.