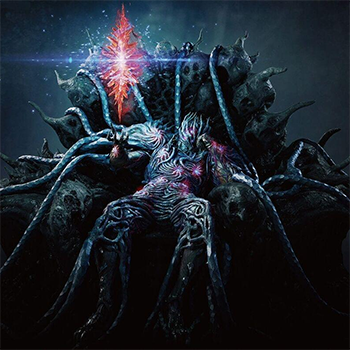 Ruler of monsters, bringer of nightmares.
"My name is Zoma. I rule the dark world. So long as I live, this world too shall be smothered in darkness."
— Zoma, Dragon Quest III
Advertisement:

The Demon King / Demon Lord is a Stock Japanese Character popular in Standard Japanese Fantasy Settings, where they are usually referred to as the "Maou" (魔王 — literally "Demonic/Sorcerous King" in Japanese) or "Daimaou" (大魔王 — "Great Maou", often translated as "Demon Emperor").note While "ou" is the most common romanisation of the long o sound, you'll sometimes see 魔王 transcribed as "Maoh" or "Maō" instead. The Demon King rules over the "mazoku" (demons/devils, 魔族 - "zoku" meaning people or tribes) and/or "majuu" (demonic/evil beasts, 魔獣 — "juu" meaning beast), and potentially various other supernatural creatures such as The Undead, Vampires, Werewolves and Youkai. Often a Demon King's mere existence spreads some kind of negative influence or miasma which makes wild monsters more powerful and aggressive, or causes them to appear in greater numbers (e.g. by corrupting normal animals into majuu); this conveniently means that killing the Demon King causes most of the threats to the world to collapse. Unfortunately, this tends to be extremely difficult without a dedicated Villain-Beating Artifact.

A Demon King is at least nominally in direct opposition to The Hero, who is usually a Chosen One literally referred to as "the Hero" / "Yuusha" (勇者 — literally "Brave Person" in Japanese), and these stories will generally end with the two fighting to the death in the throne room of Demon King Castle. This opposition may not even have an explanation other than "it's the Hero's job to fight the Demon King," though to be fair most people realistically wouldn't need an excuse to oppose the sort of person we've been describing thus far.

Demon Kings are usually portrayed as recurring characters in-story, so that their position doesn't usually stay vacant for very long. In some cases, after a Demon King's defeat, a new figure will sooner or later rise to fill their vacant throne, claiming their title and cosmic position. In others, the Demon King will simply reincarnate, being periodically reborn or resurrected to assail the world and threaten a new generation of heroes. Other works take middle routes, such as by having a new villain take the place of a reincarnating predecessor if they're somehow killed Deader Than Dead or a metaphysical "mantle" that passes from individual to individual when its holder is killed.

While the character was originally played straight as an archetypical villain, it quickly reached the deconstruction or parody phase, and more often that not, he's either an Anti-Villain who is just misunderstood, a Designated Villain who isn't even evil or shown doing anything particularly bad, or an outright Hero. In fact, it's very common for the plot to invoke the fact that he's just a Designated Villain up against a Designated Hero, and for the story to actually be about the two fighting their destinies. Other Stock Parodies include a Demon King who goes through dozens of "true forms" in a single fight, or similarly an endless line of The Man Behind the Man (e.g. the Demon Lord was just a pawn of the previously-unseen Demon King, who in turn serves the Demon Emperor, who is a mere shade of the Demon God, etc.).

Demon Kings are prone to having a beautiful daughter who needs protecting. Other times, the Demon King blows the hero's mind by actually being a woman - heroic and sympathetic portrayals are especially likely when this is the case. Romances between Heroes and Demon Kings are also quite common, as it turns out.

As with many JRPG tropes, the first three Dragon Quest games are the Trope Codifiers for this character type, with most instances drawing heavily from the Dragonlord (he of "Join me, Hero, and I will give you half the world!" fame (he's lying)), and/or his ancient predecessor Zoma. The parodic version, meanwhile, was likely popularized by Maoyu. The actual term "Maou" is quite old however, probably originating as a title of Mara, and later being extended to similar figures like Satan.