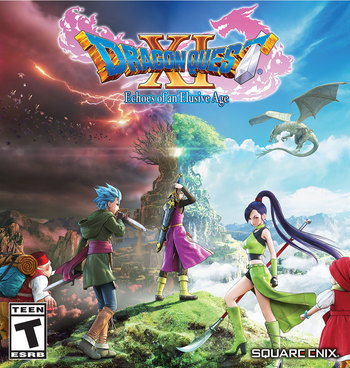 Dragon Quest XI: Echoes of an Elusive Age is the eleventh mainline installment of the Dragon Quest series. It was released in Japan on July 29, 2017 for the PlayStation 4 and Nintendo 3DS, with an international release on PS4 and PC on September 4, 2018.

A Nintendo Switch version was announced for a worldwide release, but was delayed due to technical issues and not released until September 27, 2019 as Dragon Quest XI S: Echoes of an Elusive Age Definitive Edition, which includes extra features such as Japanese voice acting, new character-specific story chapters, new sidequests, and the ability to change between polygonal and 16-bit pixel art visuals. XI S was eventually released on PS4, Xbox One and PC on December 4, 2020, marking Dragon Quest's first appearance on one of Microsoft's consoles.

Long ago, the world of Erdrea was beset by a powerful, malicious darkness. This darkness and the monsters it spawned were eventually defeated by a great hero known as the Luminary, who wielded a blade of light. For centuries, peace reigned, but 16 years ago, on the date of the birth of the Luminary's latest reincarnation, the monsters suddenly returned, burning the great kingdom of Dundrasil to the ground and slaughtering its people.

Since that fateful day, the legend of the Luminary has been split in two. One side claims that the Luminary is a force of righteousness, and will one day rise to cleanse the land once more and restore peace. The other side claims instead that the Luminary's (or "Darkspawn" as they prefer to call him) mere existence beckons the darkness to return with his light, and only by slaying him will the monsters return to whence they came. One such believer of the 'Darkspawn' version of the legend is King Carnelian, ruler of the nation of Heliodor, the most powerful nation in Erdrea (especially following the fall of Dundrasil, alongside another nation, to the monster hordes). Under his command, his forces are keeping a sharp eye on the four corners of Erdrea for the emergence of the Luminary, utilizing their otherwise friendly relations with other nations and cities to be ready to spring to action once the "Darkspawn" is located. As the years have gone by, the "Darkspawn" version of the legend has gradually overtaken the original legend, to the point that those who still believe the Luminary to be a hero are often ruthlessly oppressed and persecuted by Heliodor's forces and followers.

The story begins with a young man, freshly 16, discovering his destiny as the Luminary. Unfortunately, following the advice of his grandfather and mother (who, being from a highly provincial village in Heliodor's hinterlands, are unaware of Carnelian's obsession), he walks right into the Heliodor throne room and discloses who he is to Carnelian, with predictable results. With the unexpected help of a guileful thief, the Luminary successfully escapes from Heliodor's dungeon, and sets out on a grand journey to discover the true source of the darkness, end Carnelian's increasingly mad reign, and discover his destiny as the savior of all Erdrea.

The Luminary appears in Super Smash Bros. Ultimate as a DLC newcomer and the second character in the first Fighter's Pass, being the default skin for "Hero"note The heroes from Dragon Quest III, Dragon Quest IV, and Dragon Quest VIII make an appearance as alternative skins. Coming alongside the Luminary is Yggdrasil's Altar as a stage, and a downloadable outfit based on Veronica for the Mii Swordfighter. This marks the first time any Dragon Quest Hero appears in any spinoff or crossover of the series in a playable format. Characters from this game would also appear in Final Fantasy Brave Exvius as part of a crossover event, as rare summons.

Also, the spinoff Dragon Quest Treasures gives party member Erik and his sister Mia A Day in the Limelight, by telling an adventure they went on when they were younger.

Tropes associated with this game are:

This happens twice to the Luminary. First his birthplace, Dundrasil was destroyed by monsters led by Mordegon trying to kill him while he was still a baby, so he ends up orphaned and grows up in Cobblestone. Later, King Carnelian believes he is a Doom Magnet and orders Cobblestone sacked for housing him with it being destroyed offscreen.

This happens twice to the Luminary. First his birthplace, Dundrasil was destroyed by monsters led by Mordegon trying to kill him while he was still a baby, so he ends up orphaned and grows up in Cobblestone. Later, King Carnelian believes he is a Doom Magnet and orders Cobblestone sacked for housing him with it being destroyed offscreen.