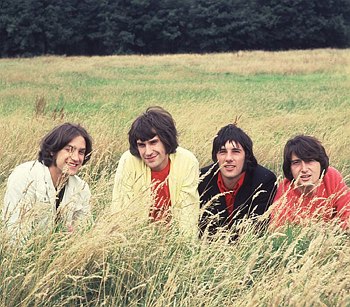 The Kinks were an English rock band, one of the "Big Four" British Invasion bands of The '60s (along with The Beatles, The Rolling Stones, and The Who) and also Long-Runners, having experienced a career's worth of highs and lows before finally throwing in the towel in 1996. While they have had many members, their most famous line-up consisted of vocalist-guitarist-songwriter-mastermind Ray Davies, his vocalist-guitarist kid brother Dave Davies, bassist Pete Quaife (left in 1969, died 2010), and the former (albeit briefly) drummer of The Rolling Stones, Mick Avory (who left in 1984).

The Kinks began their career as a bluesy, hard-edged mod-rock band, gaining success with their loud, memorable hits "You Really Got Me", "All Day and All of the Night" and "Tired of Waiting for You", which set them up as a band to contend with and provided endless inspiration to such future genres as Garage Rock and Power Pop. Their rowdy live shows got them banned from America until 1969, although arguably this served them well in the long run, encouraging Ray Davies to write songs that emphasised the band's quintessential Englishness and tended to a more nostalgic and pastoral feel than their States-struck contemporaries.

They changed gears in 1965, diversifying away from scrotum-grinding guitar anthems to experiment with other genres like folk, music hall, country and blues-rock, resulting in a more laid-back sound. It was also around this period that Ray developed his now-famous lyrical talent. This period saw the release of songs like "Dedicated Follower of Fashion", "Sunny Afternoon", and "Waterloo Sunset", culminating in the acclaimed late-'60s albums The Kinks Are the Village Green Preservation Society and Arthur (Or the Decline and Fall of the British Empire).

The band changed once again in The '70s, exploring more of an archly theatrical, campy sound. This only worsened their declining popularity; however, the resulting concept albums are starting to garner some reappraisals. They then restyled themselves as an Arena Rock band in 1976. Lucky enough to be synchronised with the Punk Rock explosion and some successful covers of their songs by punk and New Wave bands, The Kinks rode their second wave of popularity until the early '80s, culminating when their single "Come Dancing" became a worldwide smash in early 1983. They then went back to being a cult band before calling it quits in 1996. However, in 2018, Ray Davies announced

plans for a new Kinks album with Dave Davies and Mick Avory.

Admired for their melodic mastery of pop, their enormous variety of styles, the insight and wit of their lyrics, and their huge influence on almost all subsequent bands (The Jam, XTC and Blur are amongst their most fervent supporters) that cultivated any sort of distinctly British outsider/underdog image.

You can now vote for your favourite Kinks album here.

"The Kinks are the Village Trope Preservation Society":