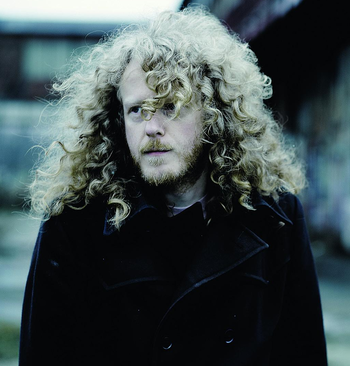 Photograph of Leyland James Kirby is without description.
"The advantage of a bad memory is that one enjoys several times the same good things for the first time.”
— Friedrich Nietzsche
Advertisement:

Leyland James Kirby (born May 9, 1974) is an English musician known for his noise and ambient compositions. While Kirby has an extensive back catalogue dating back to the late 1990s of recordings under almost a dozen stage names as well as his own name, he is without a doubt best known for his releases under a project titled The Caretaker. The project ran for 20 years, beginning in 1999, first gaining widespread attention online in the early 2010s, and concluding at the tail end of that decade with the release of the final installment of the album series Everywhere at the end of time.

In its infancy, The Caretaker dealt primarily with ideas of ghosts and memory as inspired by The Shining (what with its name being a direct Shout-Out), solidifying a trademark sound of sampled ballroom jazz recordings from the 1920s and '30s being altered to create dreary, atmospheric ambient music. The breakthrough acclaim of 2011's Lighter and Softer An empty bliss beyond this World brought unprecedented levels of attention to the project, which also led to the initiation of a new era of sorts, as Kirby initially had no plans to continue the project beyond that album, and had a new audience with which he could expand upon the themes he wanted to cover.

Kirby then became more interested in musically exploring dementia and how it impacts people. This approach culminated with a 6.5-hour album series called Everywhere at the end of time, released between 2016 and 2019, in which Kirby "gave the project dementia" and sonically represented the stages of the disease from onset to death.

After this series, Kirby announced that the project would no longer be active, with the Caretaker character symbolically dying with the completion of the album series. However, he still released one more album before calling it quits (at least as far as his Caretaker persona is concerned).

as The Caretaker
as Leyland Kirby
as The Stranger

All you are going to want to do is get back to those tropes: