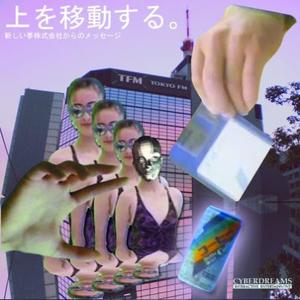 Vaporwave (also called "vapor") is a genre of music that originated on The Internet at the beginning of The New '10s. Staples of the genre include the use of (and/or influence from) smooth jazz, R&B and Japanese City Popnote Funk, soul and pop songs from the 1980s from The '80s and 90s; corporate iconography and sloganeering; early computer-generated artwork; symbols of capitalism and opulence; and a clear case of irony poisoning.

Music created during these early years primarily consisted of taking music from the 1980s and chopping and screwing it — cutting loops of songs out and slowing them downnote a technique pioneered by DJ Screw, for whom "screwing" is named after — as well as adding filters, reverbs and delays. This "first wave" (no pun intended) or "classic" vaporwave sound — also known as eccojams — is synonymous with the name of the genre, and there are many artists who still work in this style. At the same time, a thread known as Utopian virtual emerged, invoking the idealism and optimism of post-Cold War society via its consumerism by using sounds of computers and commerce from the 1990s in a more melodic, positive and less harsh way.

Broken transmission (or signalwave) abruptly shifts through samples and loops of commercials to evoke channel surfing and being endlessly bombarded with advertisements as a full-faced critique on mindless (un)ethical consumption under capitalism and an inverse to utopian virtual. And lastly, there's late night lo-fi, a vaporwave counterpart to the lo-fi house and lo-fi hip hop genres. All of these genres more or less work with the same sample base of 1980s songs, but there's been a notable shift towards composing original tunes rather than simply sampling. This explosion of genre-blending abandon is considered the "second wave" of vaporwave.

Aesthetically, vaporwave incorporates a barrage of 1990s advertising iconography and sloganeering alongside images of buildings, beaches and other signs of opulence, littered with Gratuitous Japanese (and later other languages). Many albums envision other worlds, generally informed by seminal CG animation like The Mind's Eye series. Resorts on sunny beaches, landscapes with Alien Geometries, and an endless mall (often referred to as the "Virtual Plaza") are common. Some artists even envision high concepts for themselves; Replica Federation, for example, envisions their music as the soundtrack for a hitman and super-spy, chronicling his adventures. The cut-and-paste use of languages gives vaporwave the feel of globalization with all of the pros and cons entailed, and can lend the feeling of a deceptively bleak, placidly dystopian future in which Japan Takes Over the World and everyone orders take-out from the videophone on their boats. Despite some speculative journalism calling vaporwave a deconstruction of American capitalism, the genre does signal a complete ambivalence towards it (case in point: 猫 シ Corp.'s mallsoft album Palm Mall features sounds of placid consumerism while using the exact font of Pall Mall brand cigarettes on the album cover). It should be noticed that some artists like Vektroid have publicly stated that their music is not intended to be anti-capitalist, while other artists are more critical.

On the whole, vaporwave is considered a polarizing genre. The original arguments calling it uncreative hipster trash have been replaced by it simply being hipster trash by 2016. There's even been a debate within the community on whether everything in the second wave is even worth listening to (or vice versa.) However, most can agree that first wave vaporwave was a great way to expand one's own musical palette. Indeed, vaporwave most likely inspired the wide range of Japanese City Pop, electronic and new age albums being reissued worldwide after only being known in niche communities for decades, as well as renewed interest in French house, a tangentially related sub-genre of house music that peaked in 2001, via its Spiritual Successor status to Future Funk. Some critically successful musicians like OneohtrixPointNever, DJ Seinfeld and Visible Cloaks have flirted with vaporwave(-adjacent) sounds and imagery as well. Much of it can be found on Bandcamp under the tags "eccojams"

Not to be confused with vaporware (despite its name being derived from it), and certainly not with Vapor Wear, which is something different entirely. Compare seapunk, which has similar origins and also makes use of nostalgic 90's imagery, and synthwave, which wholeheartedly embraces the 1980s in its music and artwork and is more akin to the upbeat, "totally radical" synthesizer workout soundtracks of that decade, primarily focusing on original compositions.

to all the various styles of vaporwave.

Now has a wiki.