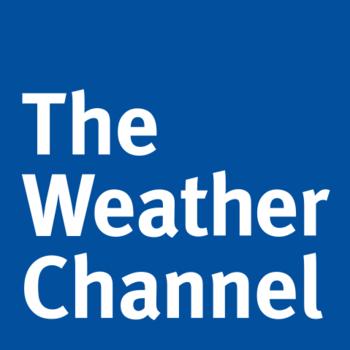 The purest nuts-and-bolts television channel that will ever be created, The Weather Channel is a 24-hour American cable weather network based just outside Atlanta, Georgia dedicated to telling you what to expect outside every morning, afternoon, evening and night. Whenever a major severe weather event isn't happening, there are also speculative documentaries usually airing each afternoon, evening, and during the overnight hours (these shows are pre-empted in case of major severe weather outbreaks).

The network is well known for its CNN-like weather coverage, and will usually be the first to send reporters, usually meteorologists themselves, to report live on site at major weather events; something that can quickly become awesome, if not crowningly so, if it involves the words "hurricane" or "tornado" occurring within visual range. The Weather Channel was owned by Comcast/NBC/Universal and two private equity firms, The Blackstone Group and Bain Capital; however, the non-TV parts of the company were sold to IBM in 2016, and the network itself was sold two years later to infamous low-budget TV producer Byron Allen.

Its Canadian counterpart is The Weather Network; a competing US service is Weather Nation (see Cable/Satellite Mudslinging below.)

Tropes invoked by The Weather Channel include:

Programs aired by the network include: