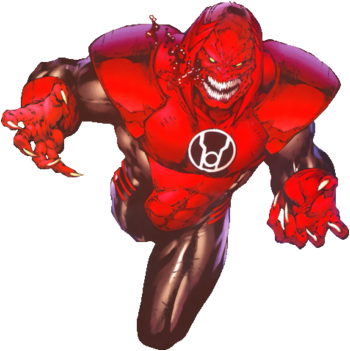 With blood and rage of crimson red,
Ripped from a corpse so freshly dead,
Together with our hellish hate,
We'll burn you all — That is your fate!
Advertisement:

Red is a color that represents many things, like energy, love and passion. But it also represents the color of rage, anger and violence, often represented by other red colored things that comes with all of that: fire and blood. This trope is all about that: violence and aggressiveness identified by this color. Don't be confused: violence does not necessarily mean evil; violence also comes with the good side, mostly seen in anti-heroes and some Hot-Blooded heroes. Also, being paired with a calm/aloof character that wears blue usually makes Red Oni, Blue Oni.

Sub-Trope of Colour-Coded for Your Convenience and a Super-Trope for Fiery Redhead, Red Eyes, Take Warning, and Bull Seeing Red. Compare and contrast Red Is Heroic. See also Red Alert, Red and Black and Evil All Over (which adds black and evil to the mixture), Bring My Red Jacket (that overlaps A LOT this trope) and Psycho Pink (if pink is used in similar manner). If used in conjunction with Light Is Not Good, you'll get White and Red and Eerie All Over. Also compare the deadly sin of wrath, which is often symbolized by this color. Not to be confused with Dirty Communists.

Her primary color is red and she's dangerously aggressive throughout her appearance.

Her primary color is red and she's dangerously aggressive throughout her appearance.