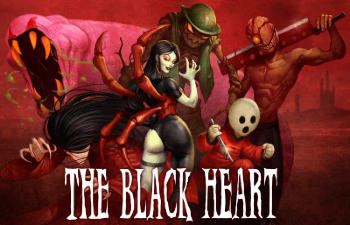 Clockwise from top: Noroko, Shar-Makai, Animus, Ananzi, Hashi, and Peketo. Not pictured: Final.
Created by Andres Borghi, The Black Heart is a 2D fighting game that runs on the M.U.G.E.N engine. The game is a horror based fighter, not unlike the Darkstalkers franchise. All the music and the great majority of the sprites are original, which is quite a feat. Unlike most fighting games, TBH features a very present storyline. There is another dimension parallel to ours, simply called "The Other World", whose king has been recently murdered by a creature born from the chaos between the worlds, named Final. The heart of the king is said to contain immense power, and each of the game's six characters is seeking it for their own reasons. They are:
Advertisement:

Each character's story is told in chronological order, as follows:

Playing story mode in this order (especially the last two chapters) is recommended.

On October 22th, 2020, a remastered version of the game was released on Steam, featuring a new game engine, improved graphics and a new unlockable character. You can view the trailer here

and the Steam page here

Crawling over your footsteps / Bleeding like a broken heart...