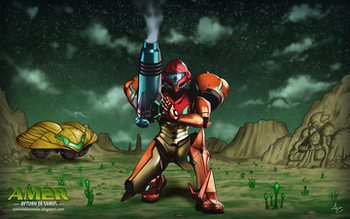 Another Metroid 2 Remake (aka Project AM2R) is a Fan Remake of the 1991 Game Boy game Metroid II: Return of Samus, started and headed by Argentinian programmer Milton "DoctorM64" Guasti. The project, which started development around 2006, aims to update the gameplay and graphics of the original game in the vein of Metroid: Zero Mission, and while beginning as a hobby project by Guasti, it expanded over time to include several different contributors from around the globe.
Advertisement:

The game was officially released the August 6th 2016, for the 30th anniversary of Metroid. Due to DMCA takedowns, apparently sent on Nintendo's behalf, you can no longer download it from the developer's blog

. Guasti said at first he and the rest of the development team would continue to update and improve the game, but due to a DMCA notice sent by Nintendo directly a week after the first DMCA notice (which apparently wasn't from an official Nintendo source), any future updates that were planned are now squashed. Guasti since has requested fans to not be angry at Nintendo for the DMCA takedowns, as it is their legal obligation to protect their IP. He has also suggested people buy the original Metroid II off the eShop to show them that people are still interested in the 2D Metroidvania genre.

Of course, given that the game had already been released, this was guaranteed to cause Streisand Effect and ensured that fans would put up their own downloads. Furthermore, some dedicated fans have since managed to reverse engineer the game's source code, and have as a result been able to release a couple of unofficial patches, fixing most, if not all, of the remaining bugs and even implemented most of the original team's planned, but unfinished features, and keep supporting the game through new releases into the 2020s.

As for the title; Guasti explained that when he started the project, it was merely one of out of a quite few other attempted remakes of Metroid 2, hence the "Another" in the title. Ironically, where the other projects ended up being abandoned, AM2R was the the only one to actually get a full release.

As it turned out, Nintendo had a hidden agenda behind their takedown request: they'd been working on their own remake, Metroid: Samus Returns, which would be announced at E3 2017 before coming out on September 15 of the same year.