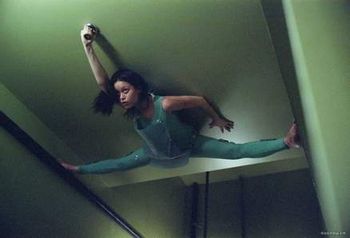 Ceiling River is watching you.
"Love it when they don't look up."
— Kim Possible, Kim Possible
Advertisement:

A character avoids pursuit or detection by hanging from the ceiling of the room or hallway. Thankfully, the upper reaches of the room have structures (walls, pipes, crossbeams, etc.) that are close enough for the hero to grab onto, even if they have to hold themselves up through sheer friction.

Luckily, nobody ever thinks to look up. The only sop to plausibility is our heredity: as walking animals we naturally focus on a horizon ring, and at our size lack in flying predators (thankfully).

This is frequently used to achieve a Fakeout Escape, e.g. when performed in a locked room or an Empty Elevator. Sometimes the seeker is alerted to the hider's presence above by blood or sweat dripping to the floor. If a monster is involved it may lead to Vertical Kidnapping.

Not to be confused with a Wall Crawl, which can also involve crawling across the ceiling.

The Ninji cling onto the ceiling, pouncing on Mario when he gets into their area.

The Ninji cling onto the ceiling, pouncing on Mario when he gets into their area.