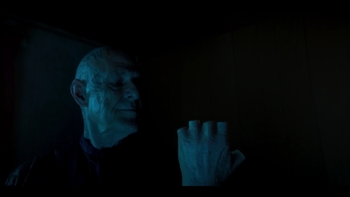 This is creepy, kooky, mysterious, and spooky enough. At least it wasn't the whole hand. That'd be all together ooky.
Advertisement:

The one with the detachable fingers.

In medieval Aleppo, kleptomaniac Tahira lives at a hospital, but carer Maryam won't listen to her warnings about creatures that come at night. And when the things do come, Maryam is the first one taken as Tahira tries to hide from the attackers. In 21st century Sheffield, the Doctor drops her companions off for a day at home, promising to meet tomorrow at lunchtime. But after Yaz, Graham and Ryan head out, the Doctor is pondering jumping straight ahead to the next day when the TARDIS briefly goes wonky and she hears a scream, as a sinister man in black appears behind her and smiles before disappearing without ever being noticed. Noting the scream came from medieval Aleppo, the Doctor decides she has time to investigate.

Yaz is late for lunch with her sister, and Sonya can apparently now cook. Ryan goes to visit his friend Tibo, but Tibo is acting a bit odd and has an unusual amount of locks on his door. Graham, playing poker with some of his friends, gets an abrupt telepathic communication from a woman who claims to be imprisoned and calls him by name. When the Doctor arrives at the hospital in the aftermath of the attack, she finds Tahira, who begs her to leave as one of the creatures remains. But the creature runs past the Doctor instead of taking her, and she can't get any readings off of the sonic. Ryan beats a downcast Tibo at a FIFA video game, but notices the kitchen is unusually dirty when he offers to make tea. Tibo doesn't want to talk about his problems, but eventually admits he's been having nightmares — nightmares with the recurring figure of a man who he feels is watching him. And not only that: he's seen the man in person, around town and even in his bedroom. Ryan reassures him that he believes the story, and Tibo asks him to stay for the night.

Yaz and Sonya eat, talking about how Sonya isn't cut out for customer service and the anniversary dinners they keep having. When they watch a movie, Yaz falls asleep as Sonya expected, but a phone rings and a voice is heard saying she didn't know who else to contact. In Tibo's flat, the man in black appears, detaching his fingers and sticking one up Tibo's ear. Ryan is awakened by a feeling and enters the room to see the man just as he regrows his fingers, demanding he stop whatever it is he's doing. Instead, the man disappears with Tibo. Yaz has a dream of standing on a road. She sees a policewoman standing behind her before being approached by a young girl, only to wake up in shock. Hearing sinister laughter, she turns to see the man in black standing there, disappearing in response to a demand for his identity.

In Aleppo, the Doctor asks Tahira about herself and determines that the creatures that attacked the hospital have made everyone else who was there disappear. Tahira explains that she's been on her own since her family died when she was seven, and she came to Aleppo and the hospital a few weeks ago, being let in because she wasn't doing too well. The Doctor receives phone calls from all of her companions asking for help, and promises to come. She triumphantly finds a hair left behind by one of the creatures before escorting Tahira into the TARDIS, saying she's about to have her mind blown. After picking up the fam, the Doctor analyzes the hair but is aggravated to be informed that the creatures don't exist anywhere in the TARDIS database, meaning they apparently never existed. When the companions explain what happened to them, Yaz and Ryan realize they saw the same man. The Doctor hooks Graham up to the telepathic circuits to determine what it is he saw in the message, and the TARDIS takes everyone to an extremely remote space observation platform in the far future. The platform is set up to observe two planets that are in the process of colliding, but being halted by an exceptional piece of engineering placed between them. An orb, inside of which is the woman who called for help.

Yaz and Ryan notice a rack of fingers in a corner of the room, and the Doctor deduces the existence of a quantum-coded lock that is holding the orb there. Tahira goes wandering and discovers a room where Maryam and Tibo have been imprisoned, unconscious. She's frightened when one of the creatures appears behind a glass wall, but the man in black appears, explaining that the creatures, called Chagaskas, are his own creation. Yaz, Ryan and Graham, having noticed Tahira was missing, burst in and demand the man leave her alone, but he just detaches more fingers and sends them at the group, trapping them in nightmares: Yaz is confronted by the policewoman and the girl, figures from her past and future. Ryan finds himself amidst flames, confronted by an angry Tibo who's been waiting his whole life for his return, and the shadows of the Dregs. Graham finds himself in a hospital room with Grace, told that he has hours to live before she asks him why he couldn't save her.

The Doctor sonics the technology to connect the TARDIS to the lock to open it, only then realizing that her companions are gone once again. Before she can do anything else, she's confronted by the man, who introduces himself as Zellin. The Doctor is skeptical, pointing out that that's the name of an ancient mythological god. Zellin doesn't disagree, revealing that he's an immortal on the same level as the Eternals and the Guardians, one who enjoys playing dark games with this dimension (games he suggests the Toymaker would approve of). He's seen the Doctor blundering about the universe, and he's discovered that humans have the most delightful nightmares. The Doctor triumphantly points out that she's unlocked the prison and will beat him by releasing his prisoner. But that's exactly what Zellin wanted: he used the Chagaskas and his attacks on humans to lure her in, needing someone from this dimension to open a prison from this dimension. The prisoner, the same kind of being as Zellin, is actually the more powerful of the two, he just rides in her slipstream. The Doctor is horrified to realize she may have unleashed something even worse upon the universe.

Through an animated sequence, the Doctor is shown the history of Zellin and the goddess, Rakaya: two immortals who entered this universe and, desiring entertainment, came upon two planets and set the worlds against each other to see which one could be destroyed first. But eventually, the people of the two worlds grew wise, realized the nature of their "gods" and united, setting their planets on a collision course before imprisoning Rakaya in the orb. The Doctor comes to and finds herself trussed up like her companions, and Zellin and Rakaya decide to go to Earth because of the human race's penchant for nightmares, as well as their tendency to beat up on themselves, which Zellin particularly enjoys.

The Doctor retorts with her trademark Patrick Stewart Speech that she finds humans special and indomitable, able to refuse to be cowed by their own fears. The villains ignore her, and begin to set their plan to harvest all of humanity’s nightmares into motion. They teleport down to 21st century England as Zellin’s fingers detach and replicate themselves over and over, and tendrils of tentacle-shaped black clouds swirl from the bedrooms around them.

The Doctor elatedly remembers her sonic screwdriver, and manages to jump and swing back and forth to throw it out of her pocket. She clutches the screwdriver and unlocks her handcuffs, before going to free the others. The Doctor steals a blue orb powering the apparatus that controls Zellin's fingers. She observes that the Chagaskas are not attacking Tahira, and realizes they are created from figments of Tahira's nightmares.

The two gods sense something is happening, and materialize in 14th century Aleppo to find the Doctor, her fam, Tibo, Maryam and Tahira, and the tech powering Zellin's fingers. The two gods scoff, but the Doctor reveals she advised Tahira to conquer her fears, thereby gaining control of the Chagaska. The Doctor and Tahira set the Chagaska loose on Zellin and Rakaya, then the Doctor (after making the standard Incredibly Lame Pun) sends Zellin's fingers after them, poofing them into Rakaya's prison, with the Chagaska screaming in their faces for all eternity. The Doctor and friends bid Maryam and Tahira farewell offscreen before traveling back to the present day.

Three years before they arrive, the girl from Yaz's nightmares is sitting on the roadside far out from Sheffield, when the policewoman approaches. A closeup reveals the girl to be Yaz herself. The policewoman asks her what she is doing by herself, telling her that her sister Sonya called in to ask for her whereabouts. Yaz admits she is bored with life in Sheffield, and hopeless that her parents don't understand. Yaz is considering running away or committing suicide. The policewoman admits she feels the same too, but she loves her job and her life too much to do so. The policewoman tells Yaz that the added years of experience helped her make the better choices in life she needed; Yaz has too many years ahead of her to throw away. The policewoman offers to take Yaz home, but first she bets Yaz that if both their lives improve before Yaz looks her up and visits her, Yaz has to pay her 50p; if both their lives get worse, the policewoman has to pay her £50. Yaz agrees to the bet and gets into the police car.

In the present day, Yaz seeks out the policewoman in her home and gives her the 50p; they reminisce for a while before Yaz goes to the TARDIS. Ryan gets the still-disbelieving Tibo to try opening up; Tibo eventually starts a blog and joins an active friend group of lonely men, where he is last heard joking about his frustrations with the self-checkout machine. Inside the TARDIS, Graham is confiding his survivor's guilt and his fear that the cancer will relapse to the Doctor, who is maintaining and repairing the TARDIS console. The Doctor can only admit she is socially awkward and troubled enough to state she cannot respond or help him. Ryan and Yaz reflect on the events of the episode; Ryan wonders how long he can lead a different life from his friends at home, and laments that even if he always returns, he will have aged differently from them; he expresses doubt that he can continue on the TARDIS for longer. Soon enough, the Doctor distracts the three by offering to take them to see Frankenstein, and the four set off on yet another adventure...