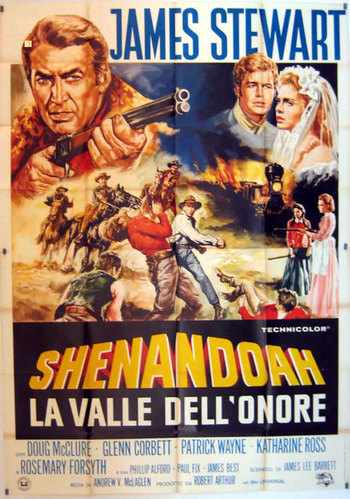 "There's nothing much I can tell you about this war. It's like all wars, I suppose. The undertakers are winning it. Oh, the politicians will talk a lot about the 'glory' of it, and the old men will talk about the 'need' of it. The soldiers, they just want to go home."
— Charlie Anderson
Advertisement:

Widowed farmer Charlie Anderson (Stewart) is living in Virginia with his children when the American Civil War breaks out. Anderson wants nothing to do with the war and does his best to keep his family out of it despite the Confederate Army trying to recruit his sons and his daughter Jennie being married to a Confederate officer named Sam.

However, when his youngest son is mistaken for a Confederate soldier and taken by Union forces, Anderson decides it is now "his war". He, his other sons (except the eldest, James, who stays behind with his wife Ann and their infant daughter Martha), and Jennie set out to save the boy. Before the film is over, the Anderson family will find itself drastically reduced.

Later adapted into a 1975 Broadway musical starring John Cullum (who took home a Best Actor Tony for his performance).

The musical also provides examples of: