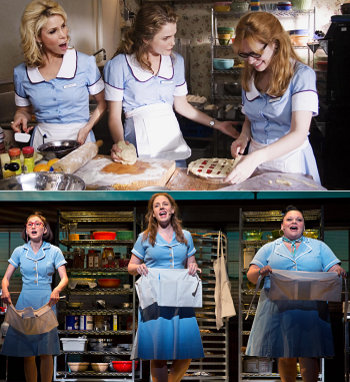 It's usually the case that hit plays get turned into movies. But more and more nowadays, the opposite is happening, with films being translated for the stage. Some say it's a sign of intellectual bankruptcy in theatre. Hollywood has the same problem, but there are a lot more new successful movies in the last two decades than new successful plays. So the stealing ends up being one way.

These are usually musicals even when they weren't in the first place (see All Musicals Are Adaptations); Adaptation Decay usually occurs here. Movie musicals are also frequently adapted for the stage, and these tend to acquire additional songs in the stage version.

This trope can be taken one step further, by going from movie, to stage musical, to Recursive Adaptation movie-of-the-stage-musical.

Separately, in Japan, 2.5D Theatre has emerged as a new branch of the anime sphere. Rather than a "safe bet", or an attempt to cash in on a popular movie, as the Broadway examples are sometimes seen, 2.5D productions are made for fans, as a new and vibrant expression of fan love, though there are exceptions. See the folder below for more information.

Inversion of The Film of the Play.

(Original title in parentheses if necessary).

2.5D began in the 1990's with series like the Sailor Moon musicals, and Sakura Wars. In the late 2010's, it has become its own vibrant corner of the anime world, with almost 200 plays produced in 2018. The label 2.5D was coined in 2015 by the producer of the Tenimyu series. They are called 2.5D because they exist between the 2D world of anime and the 3D world of regular theatre.

These productions tend to be made for audiences who are already fans of the source material. They also tend to be series that follow successive story arcs.

How do new fans catch up? Another unique point about 2.5D is that the plays usually have short runs, followed by a bluray release. Popular series like Touken Ranbu and Ensemble Stars will run for 2-3 months and tour throughout Japan and even overseas, while other plays will often only run for a week. 2.5D combines the focuses of live theater and video media in ways that other productions don't often do. This means the actors have to act for the camera and the back row simultaneously.

The venues themselves become gathering places for fans, and the atmosphere is like that of an anime event.

The 2.5D sphere also includes productions that are not adaptations, such as Kuro To Shiro and Messiah.

2.5D productions with their own pages:

Other anime, manga, and games with 2.5D stage adaptations.

Other Stage Adaptations of TV Series and Video Games