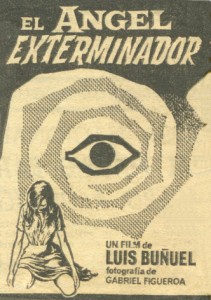 "The best explanation of this film is that, from the standpoint of pure reason, there is no explanation."
—The film's preface
Advertisement:

The Exterminating Angel (El ángel exterminador) is a 1962 film directed by Luis Buñuel. It tells the story of a group of friends arriving at the house of a wealthy society couple for a lavish dinner...who then find themselves unable to leave. This causes confusion which leads to desperation, panic and brutality.