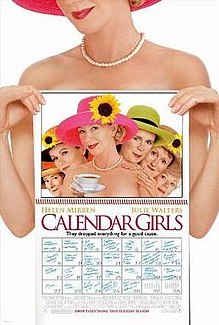 Calendar Girls is a 2003 British comedy starring Helen Mirren, Julie Walters, and Geraldine James, Based on a True Story of a group of Yorkshire women who produce a nude calendar to raise money for Leukemia research after the husband of one has been diagnosed. In a way, it is the Spiritual Antithesis of 1997's The Full Monty.