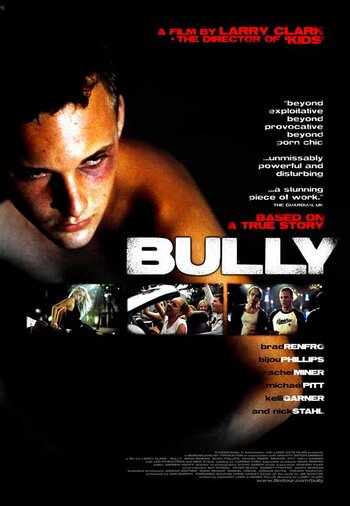 It's 4 AM... do you know where your kids are?
"I wanna ask you something, Marty... Why do you let Bobby treat you the way he does?"
— Lisa
Advertisement:

Bully is a 2001 drama film directed by Larry Clark, adapted from the true crime novel Bully: A True Story of High School Revenge by Jim Schutze. The film is very loosely based upon true events surrounding a man named Bobby Kent, and the group of "friends" around him (all characters in the film carrying the real names of the people involved).

Bobby (Nick Stahl) is a bully, obnoxious at best and sociopathic at worst. He regularly inflicts remorseless physical, emotional and/or sexual abuse on those around him, most of all his so-called best friend Marty (Brad Renfro). After Marty's girlfriend Lisa (Rachel Miner) and her best friend Ali (Bijou Phillips) have a few particularly damaging encounters with him, Lisa decides that enough is enough.

Wanting to free Marty and those around Bobby from his tyranny once and for all, Lisa plots to kill him, and gathers a group of people around their small Florida town willing (however reluctantly) to assist in doing the deed. However, in the midst of their impulsive desires to enact justice, their naïveté ends up creating dire complications for them.

Not to be confused with the 2011 documentary. For the video game also named Bully, which is unrelated to the films, go here. For the character trope, see The Bully.

As this film is based on true events, all spoilers are off. Proceed with caution.