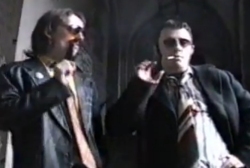 True Bulgarian badasses
Bułgarski Pościkk (can be translated as Bulgarian Chase) is a trashy, but somehow funny comedy by Polish movie group known as Skurcz (Spasm), being their first full-length and of course, low-budget movie. Bułgarski Pościkk is notorious for intentionally poor "special effects" (especially those involving blood and stunts), costumes and screenplay - just for the sake of crazy parody and pure fun, while mantaining a low budget. However, the movie's soundtrack includes a few catchy jazz songs.

The movie tells the story of two Bulgarian secret agents: Laszlo and Asparuch, who are on their job to catch and eliminate three traitors. They are sent to Warsaw, Poland, where traitors are said to hide and posess a video tape embarassing to the Bulgarian intelligence, which has to be retrieved. But their mission is not easy - the mighty Bulgarian agents face various hazards like poisoned kebab dishes, hostile shopkeepers, karate fighters on drugs, and many, many more.

note Subtitles NOT included! You were warned.

The movie includes examples of: