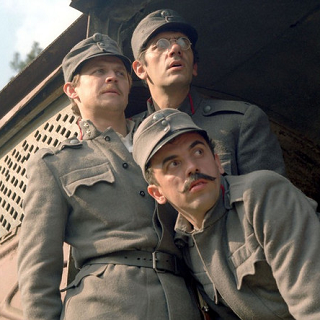 Clockwise from top left: Kania, Haber and Benedek.
C.K. Dezerterzy is a 1985 Polish comedy by Janusz Majewski, based on a comparably less well known 1937 book by Kazimierz Sejda. It tells a story of four soldiers of the K.u.K. Army: a Pole Jan Kaniowski (named Stefan Kania in the novel), an Austrian Jew Moritz Haber (named Isidore in the novel), a Hungarian Lajos Benedek (named Lajos Szokolon in the novel) and a Czech Hudej (or an Ukrainian named Ivan Hladun in the novel), who, along with an Italian POW Baldini, decide to go AWOL after a disastrous inspection of their unit by an Insane General that lands all of them in jail.

Tropes common for the film and the book: