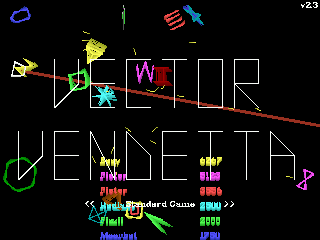 So many vectors!
Vector Vendetta is a casual Shoot 'em Up game featuring vectors. On the first screen, a trio of triangles circle around randomly, until you shoot them. On each subsequent screen, more vectors appear, and a new type of enemy is added. For instance, there's the Snipe, which stays on the edges of the screen and shoots at you, the Aster, which splits in two when hit, and eventually the BFG. Thankfully, some enemies drop little stars when killed, which invoke a Gradius-like system of powerups that can increase your speed, defense, and firing power, or unleash a powerful one-shot weapon.
Advertisement:

Being a 2010 freeware game by Crystal Shard, it can be downloaded for PC here

. Perhaps surprisingly, it is created in Adventure Game Studio, despite not containing any adventure game elements or indeed any sprites.