Never Bring a Knife to a Gun Fight 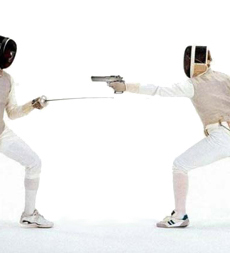 En garde, bitch!
"Those who live by the sword get shot by those who don't."
— Joke
Advertisement:

Both a Stock Phrase and a staple of the action genre. A character comes into the scene armed with what he thinks is sufficient, only to find out he is severely outclassed weapon-wise, because he brought the entirely wrong type of weapon (usually the superior weapon is revealed after the first person has committed to a fight). Could lead to a Curb-Stomp Battle (which would make it a Pre-Mortem One-Liner, or maybe a Bond One-Liner if uttered after), or the character running for his life.

Literally taken, this phrase is also a popular way to point out that in the Future where ranged weapons are ubiquitous, people still prefer to do old-fashioned Sword Fights (e.g. lightsabers).

Elmer Keith is the trope namer... he was a gunwriter and Idaho cowpuncher, and the phrase is sometimes called "Keith's First Law".