Film / Once Upon a Time in China 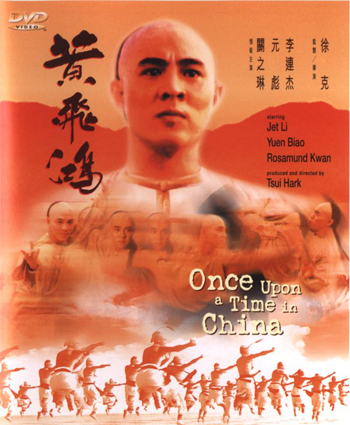 Once Upon a Time in China is a 1991 wuxia martial arts film directed by Tsui Hark, a long time collaborator with John Woo.

The protagonist is Doctor Wong Fei-hung (played by the inimitable Jet Li), philanthropic physician of the Po Chi Lam clinic and the greatest warrior of Real Life 1875 Canton. Possessing a skill in the Martial Arts that was matched only by his kindness and mastery in healing, Master Wong was respected by friend and foe alike, protecting the citizens of Canton from the predations of The Triads and the Tongs and the greedy Western invaders who sought to exploit China's great riches. He inherits his father Wong Kei-Ying's title as one of the Ten Tigers of Canton — the greatest warriors of Southern China.

The story begins when the love of his life, "13th Aunt" (not by relation, but because his grandfather and her father are Blood Brothers), returns from a 3-year education in England. Though the perspective and charm derived from her western education fascinates Fei-hung, an awkwardness forms in their relationship, as it clashes with his traditional eastern values. On that same day, a young, unemployed-acrobat — Leung Foon (played by Jackie Chan film veteran Yuen Biao in the first film, and Max Mok in all subsequent films) — wanders into Canton seeking instruction in the martial arts. Instead, he blunders into and insults the Shaho ("Sand River") Gang — a vicious Triad that terrorizes and fleeces the innocents of Canton, already destitute from simultaneous British and American exploitation.

A great warrior though Wong Fei-hung may be, he can only watch helplessly as the Western government indiscriminately guns down many innocent Chinese at an opera performance in an attempt to apprehend assassins targeting Western dignitaries. He is then framed for the crime by the Shaho Gang and confined to his clinic by his own government so he could heal those injured and dying from the massacre. Now unhindered, the Shaho Gang start to kidnap scores of women to be sold into prostitution in America and gain the alliance of "Iron Vest" Yim - a martial artist whose skin can be broken by no weapon. With Leung Foon as his apprentice, Master Yim seeks to break out of poverty by challenging Master Wong to establish his school in Canton through the fame and respect of defeating the Tenth Tiger.

It is in this desperate climate that Doctor Wong Fei-hung must fight not only to save the people of his country, but also to reconcile with what it means to be an idealistic and heroic Chinese warrior in an increasingly cynical and westernized world.

Once Upon a Time in China revitalized not only Jet Li's (then) fledgling career, but revitalized credibility in Kung Fu and Wuxia cinema as a medium that is just as capable of conveying an emotionally rich and politically relevant story as any European Arthouse film, through a combination of magnificent cinematography, tour-de-force acting, and a heartfelt and human story. This paved the way for future films such as Crouching Tiger, Hidden Dragon and Hero (2002).

Followed by two more sequels starring Jet Li before a falling out between him and Tsui Hark that resulted in him being replaced by ninteen-year-old Vincent Zhao Weng Zhou in the next two films; Tsui and Li would not work together until they reconciled for Flying Swords of Dragon Gate, 19 years later.

In the mean time, Jet Li does return to play Wong Fei-hung twice more in the embarrassing slapstick In Name Only "sequel" Once Upon A Hero In China (which is completely separate from the continuity of the first 3 films), before returning to the franchise proper in Once Upon A Time In China And America, directed by Sammo Hung (who also choreographed the fight-scenes). In this film, the stage is moved to The Wild West era San Francisco, creating a unique (for the time) Wuxia meets Spaghetti Western film.

Once Upon a Time in China is a continuation in the legacy of Wong Fei-hung films, which presently include over 100 films since the black-and-white era.

No, it's not a spin-off of Once Upon a Time. Just look at the year of release. Also has nothing to do with the one in the American West, the one during the Mexican Revolution (when it's called by that name), the one in America, the other one in Mexico, or the one in Hollywood.

Once Upon a Time in China provides examples of: