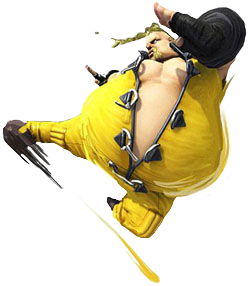 Who's the fastest... and the fattest.
"For someone who cannot see his feet, you're very light on them!"
— Prince Naveen, The Princess and the Frog
Advertisement:

This is when a fat or heavy character is much Faster Than They Look. After some chuckles from the audience, they reveal that they can maneuver like a gymnast, sprint like an Olympic runner, or kick you like Bruce Lee. This trope is likely a subversion of the Mighty Glacier and the idea that someone large is automatically slower because of their size. May intersect with Stout Strength if the character is also strong and tough, although being merely fast and easily hurt is not unheard of. The character may be a Heavyworlder, explaining some of their ability and density.

Almost always male, probably due to the media reluctance to ever depict a female of less than average mainstream attractiveness.

Sometimes Truth in Television, since body fat has little bearing on muscle or flexibility – the correlation is between fat and lack of exercise, so someone who exercises but still eats a ton can end up like this. For example, sumo wrestlers and linebackers in American Football.note As a swing position, the ideal Linebacker is fast enough to catch and tackle running backs, hefty enough to go toe to toe with the offense's guards and tackles, and agile enough to outmaneuver those same guards and tackles in a blitz. Moreover, mass × acceleration = force, so as long as someone can move effectively, more mass means more powerful strikes when they hit you. (In fictional works, the talent will often be humorously explained by way of the fact that, well, round people "roll" really easily, and thus will be good at basic tumbling.)

Compare Kevlard (which often goes hand-in-hand with this trope) and Stout Strength (where the fat guy is strong rather than agile). When both Kevlard and Stout Strength are in play, an acrofatic character is a Lightning Bruiser. Glacier Waif is the inverse. A very good way to establish a character as Big Fun. Characters like this rarely have their weight commented on, unless indicating a benefit. Whenever an anthropomorphic animal is portrayed this way, it will invariably be a martial artist panda.