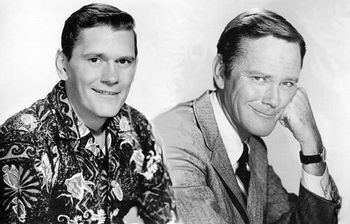 York's on the left and Sargent's on the right. Which Dick do you prefer?
"Dick Sargent — didn't he play Dick York on Bewitched?"
— Crow, Mystery Science Theater 3000, "Parts: The Clonus Horror"
Advertisement:

This is when a new actor is brought on to play the same character as a previous actor who has left the series, with no explanation for the switch given to the audience. Named for the famous Darrin swap case: Dick York to Dick Sargent, on Bewitched.

Sargent-York became a notable phenomenon only with the rise of series television. Prior to TV, there was no expectation that a role in a theater production would be played by the same actor. It was, and still is, assumed that any production of a particular work would seek out whatever actors it wanted for the roles, and a single production can feature different actors in the same role on successive nights.

However, TV broadcasting made a bond between a role and a particular actor. Television audiences, unlike theater audiences, found it more difficult to suspend their disbelief in this respect. Maybe this was because reruns existed which would forever tie the appearance of a character to the actor that played them. Or maybe because a TV series, however long, is still perceived as a single, continuous narration — as opposed to multiple performances of a theater play.

In daytime soaps, there are several standardized ways this is done:

Contrast The Nth Doctor, which is the trope for cases where character's new voice and appearance are explained in-universe. If there's a Time Skip and most of the cast remains the same then it can be a Time-Shifted Actor if the age difference justifies the particular change. For long-term cast attrition in general, see Long-Runner Cast Turnover. Flashback with the Other Darrin is a subtrope where a previous scene is reshot with the new actor.

This often is the case for spinoff series and video game versions of animated films. Celebrities typically do not reprise their roles in these cases, either because the producers cannot afford them, or because they work solely in films.

Unsurprisingly, this tends to be the cause of many cries of They Changed It, Now It Sucks! from the fandom, especially if the previous actor had been associated with the character for so long that they're considered to be the actor for that character. Sometimes though, the new actor can be wholly embraced by the fandom, with the new actor being regarded as the actor instead of the previous one. Unsurprisingly, when these two sides meet, the results tend to be predictable.

Compare with Suspiciously Similar Substitute, Fake Shemp, The Other Marty, Obvious Stunt Double. Directly related to Character Outlives Actor. Contrast with You Look Familiar for when the actor returns as a different character in a later installment. Can be Hand Waved via Direct Line to the Author. Often subject to Replacement Scrappy-ism. Or on the other hand, look to The Pete Best when replacement surpasses the original in popularity. Often done with Continuity Reboots. Occasionally explained away with Magic Plastic Surgery. Usually the replacement is a Poor Man's Substitute.

Defiance of this leads to Role Reprise. If the original actor returns to the role later on after being recast, see The Original Darrin.

The Pietro of WandaVision looks quite different from that on Avengers: Age of Ultron.

The Pietro of WandaVision looks quite different from that on Avengers: Age of Ultron.