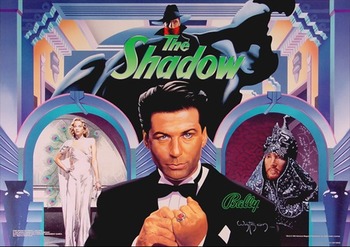 No one can resist the power of... The Shadow
The Shadow: "You're finished, Khan!"
Advertisement:

The Shadow is an arcade pinball game designed by Brian Eddy with art by Doug Watson, and was released in 1994 by Williams Electronics under the "Bally" label. Based on the 1994 film of the same name, it features custom voice clips from stars Penelope Ann-Miller (Margo Lane), John Lone (Shiwan Khan), and Tim Curry (Farley Claymore). Alec Baldwin was unable to provide lines, so you’ll have to settle with Williams alumni Tim Kitzrow to voice The Shadow himself.

As with the movie, Lamont Cranston is a Rich Idiot With No Day Job who is secretly The Shadow, a vigilante with psychic powers. Battling crime in 1930s New York City, The Shadow must stop the evil Shiwan Khan, who's out to detonate an atomic bomb and destroy the city as part of his plan to conquer the world. As The Shadow, the player must Punish the Guilty, defuse the Beryllium Sphere, Discover Hotel Monolith, and perform other tasks from the movie to stop Khan's forces. Use your mental powers to control the playfield Diverters, then seek Vengeance on Khan and engage him in the Final Battle.

The Shadow's notable features include the two-way ramps with a player-controlled diverter, the Battlefield, a Breakout-style mini-playfield, and a magnetic ball lock, which freezes the ball and pulls it into the Sanctum lock. Unfortunately, the public's lackluster reception to the film doomed this game to obscurity; many players who managed to look past the license and the middling backbox art have called it an overlooked classic, with challenging gameplay, spectacular sounds, and beautiful playfield art.

The Shadow: "Finally, you've learned to control the pinball!"