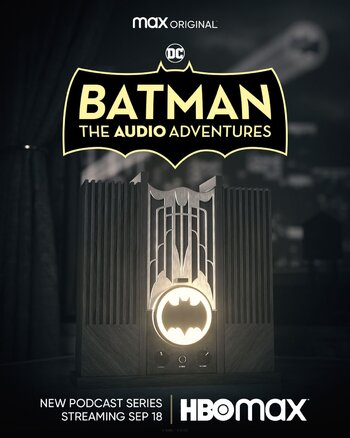 Gotham. A glittering web spun by a conspiracy of spiders. Join us now for a tale of "Life and Death in Gotham City."
Advertisement:

Batman: The Audio Adventures is an Audio Play styled podcast about, well, Batman. It is written by Saturday Night Live veteran Dennis McNicholas and published by Blue Ribbon Content.

As Batman is preparing to be officially deputized by the Gotham Police Department, he finds himself forced to contend with Harvey Dent (AKA Two-Face) as he faces a dangerous breakdown on the second anniversary of his disfigurement, Edward Nigma (The Riddler) as he looks to prove his intellectual superiority at long last, and the Joker as he makes plans for what will be a twisted Valentine’s Day.

The 10-episode series dropped on September 18 (Batman Day) 2021 on HBO Max. Initially, only the first two episodes were made available through other means, but in early September of 2022, the entire first season was released as a publicly available podcast and on YouTube.

A second season is set to stream on HBO Max starting October 7, 2022. The first two episodes of the season were publicly released in early December the same year.

Welcome, to another page, of tropes and examples in Gotham City: