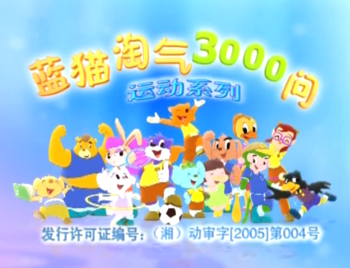 The show is about a curious and optimistic cat named Blue Cat. His friends include Feifei the smart and awkward fox, Naughty the naughty and adventurous mouse, Gali the lovely and somewhat-troublesome mouse, Fatty the honest and gentlemanly mouse, Aunt Hen the formal and old-fashioned mother hen, Sweet the straight and simple pig, Badou the strong bear, Dr. Yang the smart environmentalist, and Lala the alien girl.

Blue Cat explores several different locations, from the ocean, to the age of dinosaurs, to the Olympic Games, and even to outer space. In each episode, Blue Cat and his friends encounter various problems and ask science-related questions like "How was Earth formed?" or "What are smartphones?" Blue Cat's questions are answered by short informational videos during the story.

The series used to be popular in China and it received a lot of merchandise. It was never popular outside of its home country due to never having an English release. Eventually, the show lost its popularity, even in its home country.

The entire series can be found for free on Youku, even for those who live outside of China.