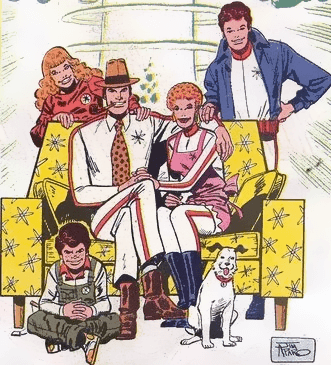 Behold, the Nuclear Family! We have "Mom", "Dad", "Sis", "Biff", "Brat", and "Dog"...and they're nuclear energy-powered robots.
Connie: I told my parents you have a nuclear family!
Steven: Nuclear?! Sure, they make stuff blow up sometimes, but that's because they're magic, not radioactive!
— Steven Universe, "Fusion Cuisine"
Advertisement:

Basis for most Dom Com series. The name references that this is the minimal "core" family unit, a single generation of parents and kids, as opposed to an "extended" family with cohabiting aunts, uncles, cousins and grandparents. Or the fact that it is usually unstable, can cause hair loss, has a fifty-fifty chance of a spontaneous split, and may also lead to early death; either works. Generally avoided in dramas, as missing parents are a good source of teen angst.

If you want to break out of the 2-or-3-kids pattern, you could try going much, much larger. This can be justified via religious beliefs note Catholics, Mormons, some Evangelical Christians, and Orthodox Jews are just a few of the groups whose beliefs promote large families, but it doesn't have to be. However, if the big family is not the main family for the story, it's almost certainly a religious reason — and almost certainly, most or all of the kids are treated as a unit, not as individuals. They may even dress and look identical except for age and gender.

You may also choose to have a gaggle-o'-kids by using a blended family. The parents' exes are even more optional than the cat.

Then again, you could go for moderation and stick by the nuclear family, but have the extended family get way more involved than is typical. Instead of a grandparent or two and the occasional uncle or unruly cousin, try adding two to three siblings on each side and two to three kids per sibling (with the childless sibling constantly asked when he or she is going to start a family). Pretty soon you have the kind of setup needed for My Big Fat Greek Wedding.

Has nothing to do with people affected by radiation or a certain ending in Fallout 4.

A Boy, a Girl, and a Baby Family is a subtrope, when there's a son and daughter around the same age, and also a much younger sibling.

Compare and contrast The Clan and Big, Screwed-Up Family.