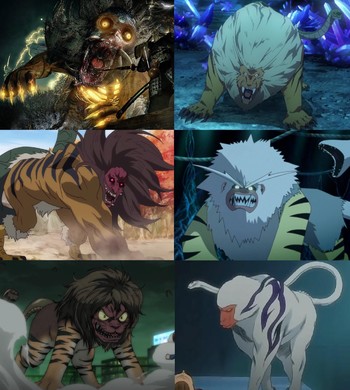 Top to Bottom, Left to Right: Nioh, The Rising of the Shield Hero, Dororo, Boruto, GeGeGe no Kitarō and Bleach
"The forlorn nature of the nue's lament perhaps ties the nue to its earliest association, in the Manyoshu, as a bird with a sad call."
"The nue does not seem to have been a common yokai in local lore, but it was certainly well-known. Sekein includes it on one of his catalogs, with the tip of its tail a vicious-looking snake's head. He mentions its association with the Yorimasa legend and also says simply that it lives deep in the mountains."
— The Book of Yokai: Mysterious Creatures of Japanese Folklore
Advertisement:

In The Tale of the Heike, the nue is described as having the face of a monkey, the legs of a tiger, the body of a tanuki (Japanese raccoon dog) and the front half of a snake for a tail. In other writings nothing is stated about its torso, so it is sometimes depicted to have the torso of a tiger. The Genpei Josuiki describes it as having the back of a tiger, the legs of a tanuki, the tail of a fox, the head of a cat, and the torso of a chicken. Due to its appearance, it is sometimes referred to as a Japanese equivalent of the chimera or manticore of Classical Mythology.

The nue is commonly classified as a Mononoke, a certain class of Youkai in Japanese folklore universally reviled as a bringer of ill omen, ill fortune, disease, war, poverty and just general bad mojo. When this beast is encountered — either in its monstrous true form or as a black cloud (a form that it commonly takes) — either be prepared to kill it where it stands or run like Hell is after you — unless you're in a work where the nue, like many other monsters in fiction, is just misunderstood.

Since the kanji for Nue can be written as "night bird" and in fact Nue can mean "Thrush", it is sometimes considered a "Kaicho" (Monstrous Bird).

Sub-Trope to Youkai. See also Mix-and-Match Critters, Classical Chimera and Our Manticores Are Spinier. Not to be confused with a Nu.

A yokai chimera. Its fanged mouth terrorizes its prey with an eerie cry. Nue is wreathed in dark smoke, making it difficult to discern its overall appearance. Its ability to summon thunder have earned it the alternate name of Raiju, the thunder-beast.

A yokai chimera. Its fanged mouth terrorizes its prey with an eerie cry. Nue is wreathed in dark smoke, making it difficult to discern its overall appearance. Its ability to summon thunder have earned it the alternate name of Raiju, the thunder-beast.