Series / Just the Ten of Us 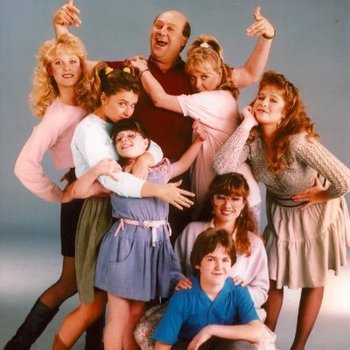 Just the Ten of Us is an American Dom Com that is a Spin-Off of Growing Pains.

The series focuses on Graham Lubbock (Bill Kirchenbauer), a gym coach who used to teach at the high school that the Seaver kids from Growing Pains (where he appeared on a recurring basis), and who is the father of eight children. As the series progressed, Coach Lubbock's four eldest daughters, the teenagers Marie (Heather Langenkamp), Cindy (Jamie Luner), Wendy (Brooke Theiss), and Connie (Jo Ann Willette), became the primary focus of the show.